A Brief History of Gamification: Part IV - The Evolution

This is the fourth post on The Brief History of Gamification, following Part I - The Origin, Part II - The Name and Part III - The Definitions. I invite others to contribute (with comments to the post) if something is missing and to correct what may be wrong or incomplete.

Since the first uses of the word gamification in late 2010, the concept quickly spread. That is due, in great part, to some popular video presentations, even if some of them do not use the word gamification. These video presentations, some at the TED Conferences, highlighted the importance of game thinking, with perspectives from game designers like Tom Chatfield, Jane McGonigal and Jessie Schell (all in 2010) or perspectives from digital marketing professionals, like Gabe Zichermann (in 2011).

In 2011, the word gamification was part of the Oxford University Press short list for the word of the year. In the same year, Jane McGonigal published Reality is Broken: Why Games Make Us Better and How They Can Change the World, a book about how features from video games could be used in different contexts making a contribution to a better citizenship and to a better world. Although McGonigal, a game designer, never mentioned the word gamification, the concept was present and inspired several other gamification’s developers and researchers. Many software applications, digital services, campaigns, products and communication strategies released in 2011 and after were inspired by this gamification movement.

Gartner added gamification to its “hype cycle for emergent technologies” in 2011, pointing for a period of 5 to 10 years for mainstream adoption. Gartner uses hype cycles to track technology adoption: after the “peak of inflated expectations” period, technologies will fall into the “trough of disillusionment”. Then, they will start evolving to the “slope of enlightenment” and some of them will reach the “plateau of productivity”. By 2013, gamification was at the “peak of inflated expectations”. 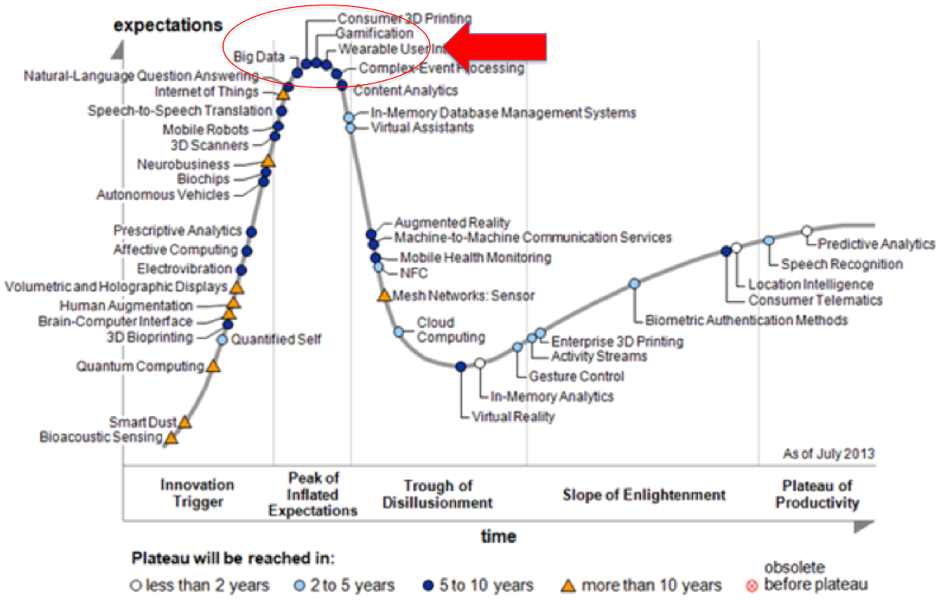 Gamification became a buzzword in the business world and a popular term in digital media.


Also with an increasing number of scholars and professionals becoming interested in the concept, along with the general public, the online learning platform Coursera launched in August 2012, a MOOC on gamification, lectured by Kevin Werbach, an Associate Professor from the University of Pennsylvania. The course had more than 80.000 registered students with further editions in 2013 (with 66.000 students) and January 2014 (with 70.000 registrations). After the first edition of the course, Werbach co-authored the book For the Win: How Game Thinking Can Revolutionize Your Business.

Since 2011, a large number of web log posts were released covering gamification related themes. These first references to gamification were very informal and debated the advantages or drawbacks of the concept and look for examples within web applications. Books on gamification were also published (e.g. Gamification by Design, Gamification at Work: Designing Engaging Business Software,  Loyalty 3.0: How to Revolutionize Customer and Employee Engagement with Big Data and Gamification). Most of them approach the concept with a business or enterprise view and others cover specific areas of application, like education and training (The Gamification of Learning and Instruction: Game-based Methods and Strategies for Training and Education; The Gamification of Learning and Instruction Fieldbook: Ideas into Pratice).

Gamified applications, gamification platforms and a large number of academic papers on gamification also became part of the gamification movement, but that is for future posts.


The concept behind gamification long precedes the emergence of the term although its spread was only possible when the digital games industry has matured and after a generation of gamers was fully active in their working lives. The proliferation of digital media, social networks and other popular Web 2.0 applications have also created the environment that helped the dissemination of a movement that, despite all the criticism, became known as gamification.


This nice infographic (first published here) shows some of the important milestones on the short but rich history of gamification:

A Brief History of Gamification: Part III - The Definitions