Gamification and games are different things. A gamified application is not a game but, sometimes, it may look like a game. Gamified applications' users should feel like players in a game, but they are noy playing a game. They are doing something else, probably some useful task.

Paharia (2013), about the differences between games and gamification, argues that “gamification is not about creating games at all” and Kapp et al. (2014), refer that “gamification uses parts of games but is not a game” (p. 69). Also Huang and Soman (2013) point that “if it is already a game, it is not a form of gamification” (p. 15). Hence, gamification is not a game (Wu, 2011) neither an attempt to simply make an application look like a game (Kumar and Herger, 2013) and also not about building full-fledged games, like serious games (Deterding et al., 2011; Werbach and Hunter, 2012). Serious games, are not the same as gamification (Schlagenhaufer and Ambert, 2014).

Similarly, gamification of education is not the same as Digital Game-Based Learning (DGBL), an approach that uses actual games (serious games, commercial games or games made by students) in a learning environment. It is not also the same as simulations, although all of these terms are related. Kapp et al. (2014) use the notion of Interactive Learning Event (ILE) to describe these different approaches: games, gamification and simulations. In Kapp et al. perspective, gamification is a type of an ILE and different from the other two types.

Therefore, gamification should not be confused with a process of transformation of some non-game activity into a game. Particularly, regarding education, the application of the concept does not mean that the contents of the various subjects are taught in the form of a game.

See also FAQ #1: What is Gamification?

Although the concept is around since 2010, there is no commonly accepted definition.

So, what is gamification, after all? The most common and accepted definition for gamification is the one proposed by Deterding et al. (2011): “the use of game design elements in non-game contexts”. This is a straightforward definition but it lacks the purpose of the concept and raises some questions. What are game design elements? What is the point of using game design elements in non-game contexts? How should they be used? The main goal is that, by moving game elements to other contexts, it will be possible to induce, on people acting in those contexts, the same engagement that players feel when they play a game. If people are deeply motivated and engaged with some task they are performing, it will be more likely that they exhibit the right behaviors concerning the completion of that task. Gamification has as final objective the improvement of users’ involvement. As also pointed out by Kumar and Herger (2013), gamification is about motivating users.

The definition I use is

The use of game elements and game techniques in non-game contexts, to drive game-like engagement in order to promote desired target behaviors.

The concept of implicit gamification, proposed by Chou  is, in fact, what is considered to be gamification under the above definition.

Marczewski’s notion of intrinsic gamification or Long Term Deep Level Gamification is also close to what I understand as gamification.

Behavior change gamification, proposed by Werbach and Hunter (2012), seeks to form new habits among a target population and is also emphasized in the last part of my definition – to promote desired behaviors. Werbach and Hunter point that this category of gamification includes “redesigning the classroom to make kids learn more while actually enjoying school”.

It is also worthwhile to watch this video from Andrzej Marczewski:

and also this post: Gamification: What’s Play Got to do, (Got to do) with it? 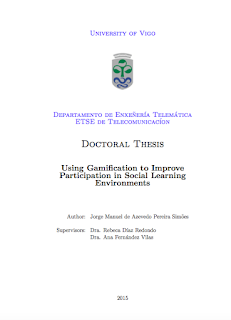 is available online at ResearchGate and Academia.edu

This thesis addresses the problem of students’ disengagement by investigating if gami- fication can make a contribution to solve the problem and how. Gamification is a new trend that aims to improve people’s engagement, motivation, loyalty or participation. It started as a marketing tool but widespread to several different areas where peoples’ involvement is a key issue. Gamification is inspired by the success and popularity of video games and looks for ways to use game’s features in non-game contexts, as a way to drive game-like engagement.

While schools are struggling with the lack of motivation and engagement of many of their students, technology is part of most children and teenagers lives in today’s societies. They are heavy users of several media that, through mobile and wireless technologies, are almost permanently present and available everywhere. Schools have to compete for students’ attention and time and find the ways to use technology in their favour and fill the gap between school and the outside technological world. Also, most of today’s students are video game’s consumers. Games have been used in educational and training scenarios for a long time. But building full-fledged games with learning purposes has high implementations costs.

Gamification is a way to take advantage of the games’ power with lesser costs and ef- fort. An initial research on gamification revealed that education was precisely one of the main fields that could benefit from this new trend. As a main goal, the thesis proposes a framework to help teachers using technology-enhanced learning environments powered with gamification. It is expected that these environments can improve students’ behaviors towards school and learning. The framework also defines what should be the high level architecture of gamified digital systems. This architecture is platform independent and is proposed as a way to help developers in the implementation of gamified systems, by highlighting what their main building blocks should be. Based on a broad literature review, this thesis presents the most used game elements and game techniques found in already existing gamified applications. A set of those elements and techniques were included in the proposed framework.

Further research was needed to investigate the impact of gamification and how to mea- sure that impact. The tendency to experience flow was chosen as a measure of engage- ment. Flow is a psychological state felt by people when they act with total involvement. People can experience flow when performing an engaging task. A high tendency to experience flow means high intrinsic motivation and a better engagement. The thesis addressed these issues by conducting an empirical study with primary education young students. The study investigated if a social learning environment with gamification tools would be more able to increase students disposition to experience flow than a non-gamified version. In this experiment, some gamified learning activities were set following the guidelines of the proposed framework.

The results from the empirical study showed that there was an improvement in the students’ disposition for flow when using the gamified version of the social learning en- vironment. The students’ average score had an increase and the statistical test taken allowed to conclude that the average score increase has statistical significance.